I had planned to post this before we left but ran out of time..
About a month ago my nephew celebrated his birthday and the girls made him a transformer inspired robot card using aluminium foil that had been glued onto card then cut into shapes and arranged.
It got me thinking about whether you could paint on foil and get that look of applying gold foil. So here are the different methods we tried. You can skip forward to the end to see our most successful, though you do get some interesting effects in the other method!
Materials
All of these methods were suited to both girls (18m and 3 1/2) and used poster paint and aluminium foil. This is a great way of reusing aluminium foil after cooking. Just rinse, dry and use. I glued the foil on to card from cereal box to make it a little sturdier. You could get interesting effects from painting on foil then using it to wrap around 3D sculptures.
Method 1
Simply paint a picture on the foil. Sorry no picture you'll have to imagine.
Method 2
This time the girls completely covered the foil in paint then drew on a design using a cotton bud. We've used this method before on our glass cutting board and taken prints of it using paper so it was interesting to draw directly on to the picture. 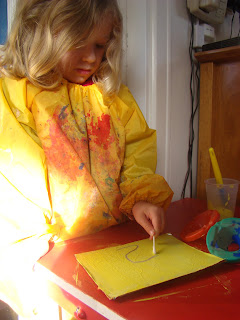 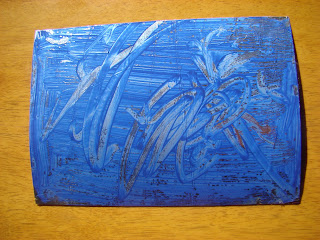 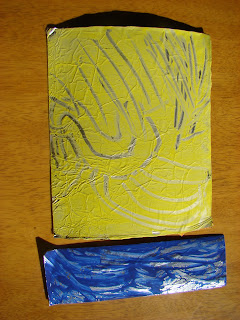 Method 3
Crinkle the foil (perfect after baking potatoes), glue onto card and paint. This was a little more like what I'd imagined though Rainbow just saw it as a challenge filling in all the cracks. 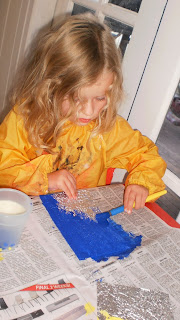 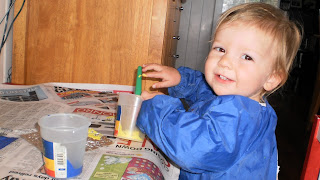 Here is Moonshine. She just loves painting but you can't turn your back on her for a minute or it goes everywhere. Her painting shows the effect I was aiming for with the metal shining through. 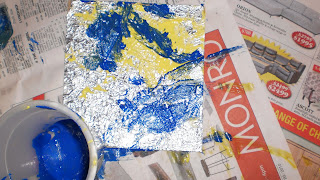 Method 4
This one we stumbled on by accident when I washed Moonshine's brush midway through a painting. If you use a very wet brush dipped in paint the paint pools in some areas and is repelled in others. I'm not sure why this happens perhaps someone can enlighten me. 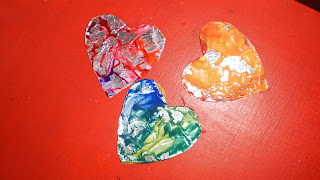 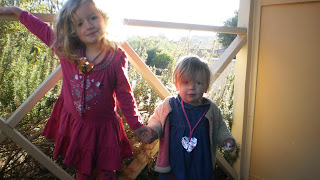 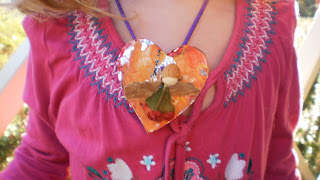 Our holiday in NSW

We had a wonderful holiday in New South Wales. I usually get to a point when travelling that I'm ready to go home but I didn't reach it this holiday!
Here are a few photos and some extracts from my travel diary... 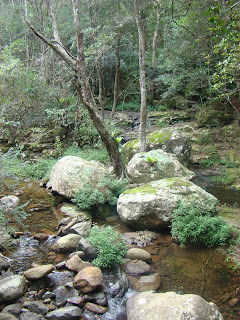 We drove to Minnamirra Rainforest Area for a picnic lunch and walk along a broadwalk. The broadwalk took us along the Minnamirra Riverlet and high into the forest. The rainforest was dense, luscious and tranquil with interesting signage. We were lucky to see a female lyrebird scratching and drinking at the riverlet banks. We also spotted two more on the verge as we drove. We enjoyed hearing the whip bird again and Russell was pleased to see the rare red cedar tree. Today we saw a platypus in the wild. 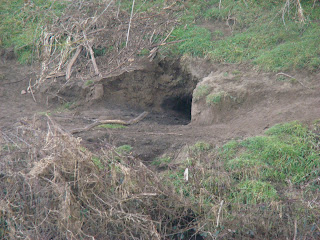 ( wombat hole)
Our final destination today was Bombala which has the highest density of platypus. Just out of town is the Platypus Reserve which features a viewing platform. Along the far bank you can see their burrows and the larger burrows of wombats. As we drove up we could see the outline of one’s body. From the platform we could see it’s nostrils as it came up to breathe and eat the food it had collected in the pouches of it’s cheeks. Afterwards we took a walk along the town river where more platypuses reside but without any further sightings. (I might point out here that we don't have wombats, platypus or koalas in WA) 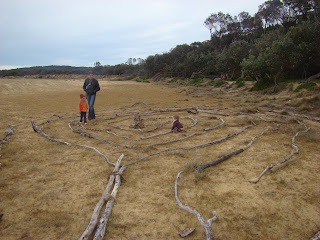 We discovering a maze left on a beach. The kids had great fun following it to discover the beach treasures.
We found at $15 a meal and $4 a beer (compared to $25 mains in Perth) it’s cheaper to eat out then to pay for self contained accommodation thought we’re getting a little tired of chicken schnitzels and bangers and mash. 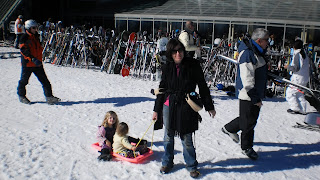 Our excitement grew one morning as we drove closer and closer to the snow topped mountains. We caught the snow tube from Bullocks Flat to Perisher. We were all rugged up in thermals, beanies, scarves, gloves and jackets to find a beautiful day at the top. The layers gradually got stripped and stuffed into pockets and lugged about. We walked over to discover the snow play and toboggan area was closed and instead joined the masses sliding down the rocky icy strip outside of this area. It was a fast wild ride with the tricky challenge of climbing aboard the toboggan without releasing the toboggan prematurely with a child onboard or slipping over in the ice. Both girls enjoyed tobogganing immensely and being towed around. Rainbow also enjoyed eating the snow. Rainbow and I had planned to ride the quad lift but after a twenty minute wait we discovered it was closed due to an electrical fault. Meanwhile waiting on the stairs Moonshine was pointing, emphatically up at the slope saying “up sn”. Dada asked if she wanted Snuggy but no it was definitely that she wanted to go play in the snow. After re-uniting we all headed to a fresh patch of snow (sign posted as off limits to toboggans!) where Rainbow got very upset that I was going too fast with Moonshine aboard. 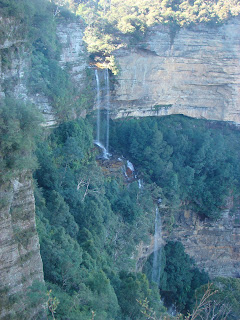 Luckily we reached Scenic World in Katoomba before the crowds. Our adrenaline lover Rainbow loved the ride on the World’s Steepest Railway. We spotted a male lyrebird on the walk through the rainforest at the bottom. We then rode a cable car back to the top. After morning tea we completed the circular track which gave us impressive views of the three sisters, the lush rainforest and the high Katoomba falls. Rainbow and I (carrying Moonshine) found the steps hard going after so many days of bush walking.
After lunch and a visit to a CWA craft store in Leura we returned to the now crowded Scenic World for our last cable car ride across the valley. From the cable car we had magnificent views of the area we had hiked this morning. 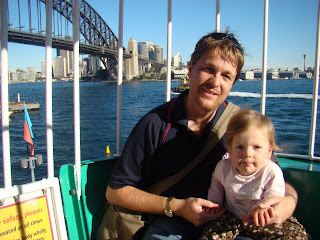 We caught the train to Circular Quay. It’s quite a shock to suddenly see the Sydney Harbour Bridge or the Opera House looming in front of you. It’s reminiscent of our first glance at the Colosseum in Rome. Both Sydney landmarks look so big compared to the surrounding landscape. We walked around the Opera House and The Rocks. We had trouble finding affordable lunch and ended up with HJs and fruit on the grass overlooking the two landmarks. By this point Circular Quay was getting busy with tourists so we caught the ferry to Luna Park. Luna Park was actually quite aesthetic with highly ornate in an old worldly way rides. We had a walk around and ride on the ferris wheel, from which you can see the harbour and bridge as well as Luna Park. 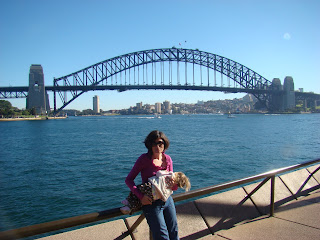 Moonshine’s breastfeeding reached epic proportions. Now every time I sit down she requests boo and if I carry her she shoves her hands down my top and repeats “boo” or points out chairs and says “boo there”. This continues with her getting more and more upset until I give in.

By our third day in Sydney we were professionals at catching public transport and find it quite easy and feel very safe navigating through Sydney. Thought you need a new ticket for each new form of transport so today catching a ferry and bus to reach Taronga Zoo cost $38.20. 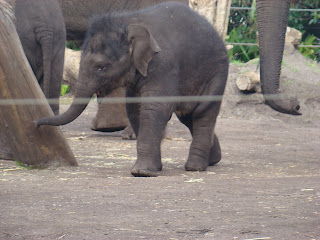 Thankfully our Perth Zoo membership gave us free entrance to Taronga. The zoo was amazing with s spectacular range of animals and large interesting enclosures. Russ was pleased not just to see animals he hadn’t seen before, such as the snow leopard, condor and pygmy hippopotamus but even a few he hadn’t even heard of. The zoo started with a large reptile area featuring the sleepy kimodo dragon and underwater viewing of turtles. Moonshine enjoyed this section pointing out the grocdile, tootle and ssss. We then saw the giraffes and a large family of grooming chimpanzees. We then reached the elephant enclosure and the saw the baby elephants that we have been talking about for months. Both girls were excited that it was nursing when we arrived and later in the day we watched the older one splashing in their lake. After morning tea we headed through the African and Asian sections. As we passed the lowland gorillas the keepers were scattering food in their empty enclosures and so we stayed to watch the gorillas be released. We were delighted to see a baby and a pregnant female and amazed at the size of the patriarch. We then headed through the large Australian section which included two bilbies in the nocturnal section and a plane rat travelling amazing distances on a wheel with an odometer. They had a wonderful platypus enclosure which allowed us to watch a platypus searching underwater for food. Finally we went on to the Southern Seas to see a graceful leopard seal.
An excellent yet exhausting six hours traipsing down the hill of Taronga Zoo. On the walk home from the subway we were lucky enough to see some of the flying bats (that roost in the botanical gardens) fly over.
We found Sydneysiders really friendly. Always happy to give up a seat on the train, fetch dropped belongings or help us carry the pram up stairs. 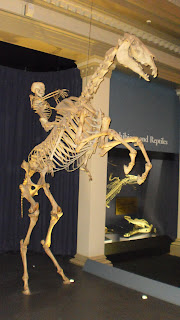 The Australian Museum was awesome. We started in skeletons which was a good example of the quality of their displays. The curator obviously has a sense of humour with arrangements such as the man riding his horse and the domestic scene. Some of the displays were interactive like the one where you could ride a bike which caused a skeleton to ride a bike. Others were really informative like one that showed how a kangaroo pelvis has long bones expending upwards to support the pouch. My favourite was the interactive mat where you put your hand on a spot and get attacked by a predator such as a massive great white shark. After morning tea and a shop we headed into the Dinosaur and Surviving Australia exhibits. Moonshine loved using a paintbrush to help excavate a fossil Finally we went to the Kid’s Place where the girls could draw, reading and play with animal toys.

We also really enjoyed the different experience of staying in an inner city apartment where the supermarkets are open to midnight and you can watch mounted police and fire trucks from the veranda.
Posted by Kristine at 1:49 PM 4 comments:

Out of the Office - LOL

I had planned on posting today but it's going to have to wait until I return. We're off to Sydney at 8.05 tomorrow morning so instead I shall read my packing list for the umpteenth time and head off to bed. I'll visit you all and share my holidays when we return in three weeks.
Until then
Kristine
Posted by Kristine at 7:49 PM 2 comments: