Did you guess the party theme from the birthday girl's party dress?
Yes Rainbow had a Rainbow party. A colourful theme for a colourful little 4 year old. Photos with details and without guests are a little light on but here we go.. There also all at the bottom of the post as Blogger is being 'uncooperative')

We decorated with the park with colourful balloons and a painted rainbow.

The rainbow is now blu tacked to Rainbow's bed head.

The table had a rainbow runner and lanterns.

Food
Rainbow's Uncle Phil made summer rolls with a partial rainbow of fillings (red capsicum, carrot, snow peas) some included lemongrass pork and were served with nuoc cham. One Grandma made a rainbow platter of fruit, so the children could make their own rainbow skewers while the other Grandma made fairy bread. We also had Smartie cookies (cook at 160 to avoid smarties cracking), Rainbow jelly and Hotdogs cooked by Uncle Ben.

Followed by the Hidden Rainbow Cake. This made quite an impression though I think it tasted like playdough but that was probably a mind trick. I used the white cake recipe from Martha Stewart but would probably just choose a yellow cake that I liked next time. I used a butter frosting. I wanted to try Swiss Meringe frosting but decided to stick with what I know. The little doll on top of is a Le Vans doll house doll which I dressed to match Rainbow's dress. She's holding (with a little help from a pin in her dress) a lollypop with a paper 4 on it. (just wet and press on)
For entertainment the kids could make rainbow felt flowers as shared by Montessori Mama. The kids wore these as wrist corsages and in their hair. You can just see Rainbow's on her wrist. To make it easy for me to cut out that many flowers in advance, our flowers were star shaped. 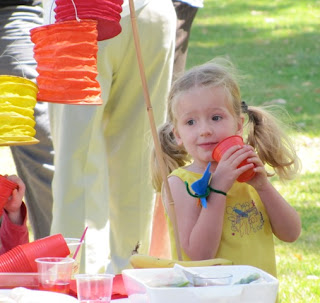 We also played a colourful and co-operative (rather than competitive) version of musical chairs. We spread out lots of hoola hoops. I called out a colour and the kids had to stand in a hoop of that colour. To win everyone had to be inside a correctly coloured hoop. As the game progressed we removed hoops so that the children had to work together (inviting, sharing, squeezing in and balancing) to ensure everyone could fit in the hoop. 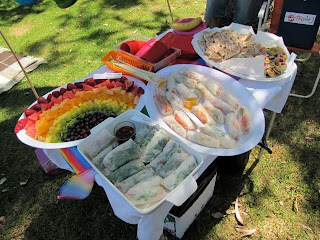 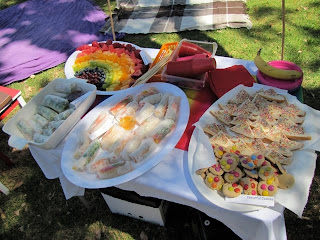 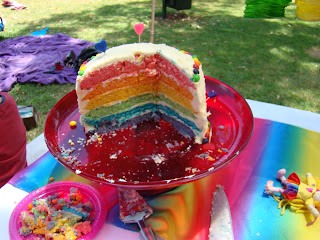 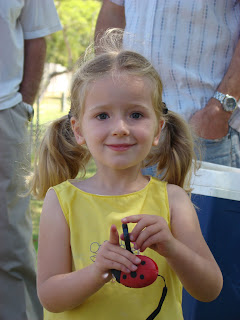 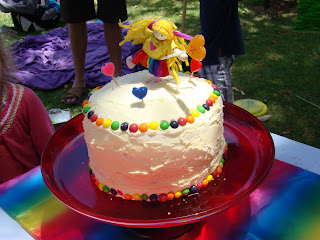 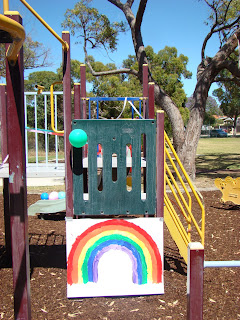 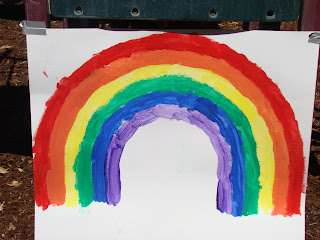 Favours We ended the party by giving out rainbow bibs to the babies and the "treasure chest at the end of the rainbow" to the kids. For these we used the template we used for our mermaid board game. 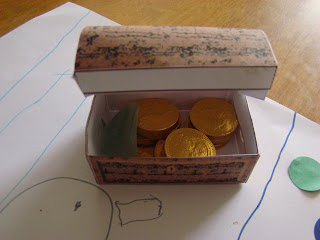 We filled this with a mirror with instructions for making rainbows at home, a box of smarties, Rainbow lolly bracelet, a Killer python and loose colourful lollies (skittles, jelly beans).
Posted by Kristine at 2:00 PM 2 comments:

Yes, I'm back. I kind of lost interest for a while. Lost interest in this and even in reading others' blogs. I found I spent more time blogging than doing anything worth blog. I think a lot of people go through this from what I've seen on others' blogs. Anyway a new year and some changes plus I miss the friendships I've formed and I think I have room for it again. I guess we'll see...


But in the meantime perhaps we'll have a share and I'll show you what I've been up too. I have popped in on many of your blogs from time to time so if there's something I've missed, that you think I'd enjoy, how about you share the link in the comments.

First up I've been sewing heaps. I made most of Rainbow's warm weather wardrobe. It looks like favourtism but Moonshine has soooooo much clothes that it's silly. She's also still at an age where one enthusiastically devoured ragu will send her outfit to 9 rounds of the washing machine before meeting it's untimely disposal. Her time will come.

This skirt is a free tutorial from the blog House on Hill Road. It's very easy though Rainbow likes quite simple clothes and finds the dangly ribbon tiresome. The same goes for the ribbon around the pink dress. The capri pants are New Look 6719. 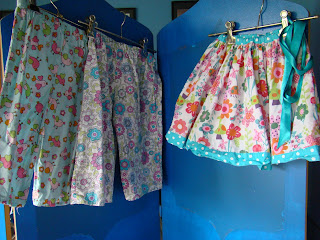 These department store shirts have been appliqued to wear with the pants and skirts without being matchy matchy. I made two more - one you can see a little of the flowers on Rainbow in the last post. The other was for Moonshine and has been disposed off - case in point! Sorry I didn't iron them! 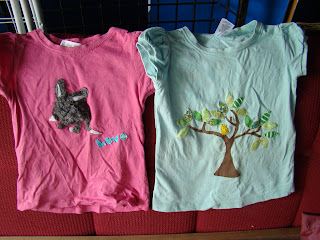 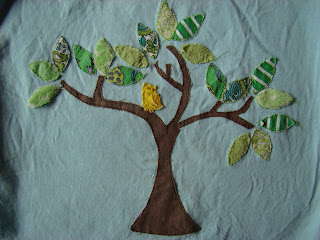 The bilby is fake fur and I just love how it turned out. 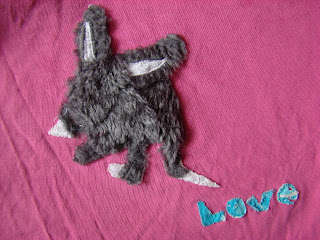 This is a new pattern for me Simplicity 2377. It's very easy and has another variation with two tiers. They're easy to make though elastic casings are small so a little fiddly. Also Rainbow finds them hard to put on as there is no give in the bodice to squeeze your shoulders through and she is not a big kid. 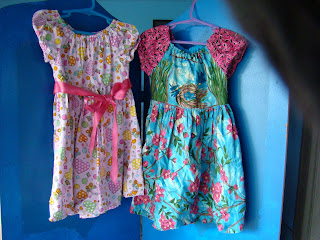 I also used this pattern to make a fairy dress. Around this time Rainbow's two fairy dresses, which were gettting heavy use, were getting very short and the weather was getting too warm to wear leggings or stockings underneath. I only found one pattern for a one piece fairy dress but on closer look found it was going to cost about $40 to buy the fabric. Instead I lengthed the top and added a gathered piece of netting with the skirt to make a fairy dress. I'll show you this dress again soon as it's getting "blinged" at the moment. 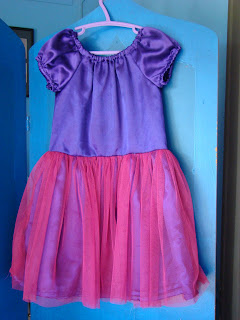 Another new pattern Simplicity 2376. I normally am drawn to brighter colours but I really like the fairy fabric one. Rainbow calls them Grandma fairies! 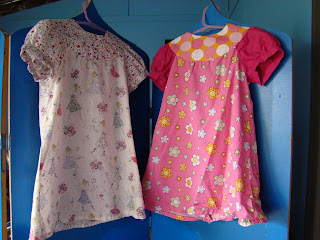 I sewed four pairs of pyjamas for each girl (two long, two short) using Simplicity 2734 and my new overlocker skills.
I also did a little restyling. The dress on the right is Moonshines. In it's former life it was a one piece jump suit. Neither of my girls could ever wear it as their chubby thighs kept bursting open the press studs. So I cut it off and added a frill and it turned into a very wearable dress. The one on the left started out as bathers. When they lost their stretched they too were chopped and converted into a fairy dress. 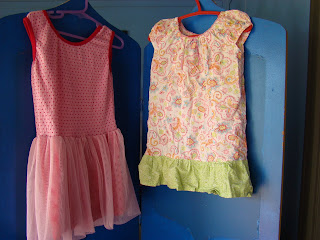 Finally a little tease: I made a dress for Rainbow's birthday with one of her pictures hand embroidered on the front. This dress uses New Look 6719. Can you guess what type of party she had? 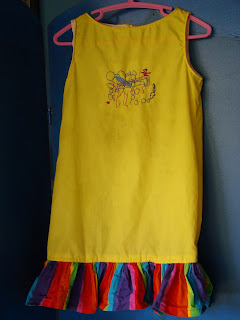 I'll share that next time.
Posted by Kristine at 1:43 PM 5 comments:

Rainbow and the Twenty Eight 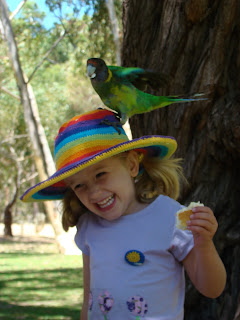 We had a picnic at Yanchep NP yesterday and Rainbow made friends with a Ring Necked Parrots. Most people call them 28s as that is what their call sounds like. This one was a juvenile and I think was supplementing his seed diet with 'picnic' foods. As you can see Rainbow was very excited by her new friend.
Posted by Kristine at 1:31 PM 1 comment: