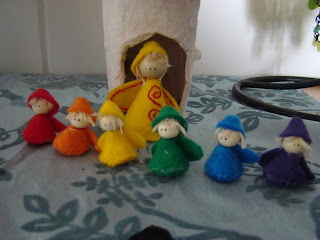 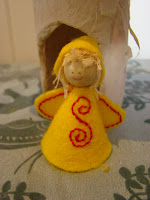 Welcome to my first tutorial. These little fairies were designed to live in the little papier mache mushroom that Rainbow girl and I made. You can just see it behind the S fairy and a slightly better photo on the winter nature table.
This tutorial is very simple and all hand sewn with matching thread. In addition to the felt you'll need a wooden bead, a seed bead and embroidery thread for hair.b They are easily adapted to any size and could be embellished. The yellow S fairy stands 5cm tall, while the little fairies are about 2 cm tall.
1. Draw up your templates. It's worth doing it on paper first so that you can see how it will fit together. Looking across the top row -
The first piece is the body. I traced around a shot glass for the little fairy and a cup for the big fairy. Cut the circle in half then cut out a wedge (about 15 degrees).
The next piece is the wings. I go for an upside down heart but you could think butterfly or dragonfly wing shape.
The third is the base. This is pretty forgiving. I just draw a rough circle around the rolled up paper body. The large yellow fairy is actually base less and commonly worn as a finger puppet.
The last piece is the hat. 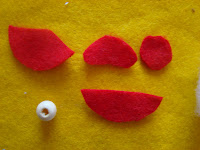 2. Fold the body in half and sew using a back stitch. Cut of the tip of the top and bottom to allow ease of turning. Then turn it so the seam is on the inside. 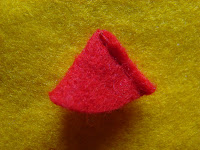 3. Use a running stitch to attach the wings so the middle of the wings lies on the seam of the body. 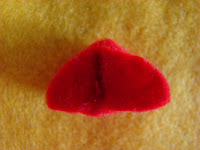 4. Sew the base on using a couching stitch. 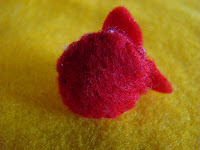 5. Push a needle from the base up through the fairies neck, through the wooden bead, through the seed bead and then back down to the base. You might need a touch of hot glue to stop the head wobbling. This step may be done before sewing the base on. 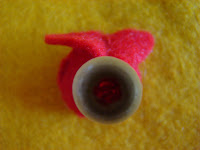 6. Sew the hat as for the body. I've also shown the hair cut into 3 lengths. Leave them bunched up. 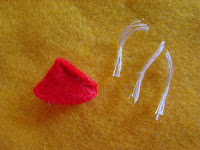 7. Hot glue the hair on to the very top so it crosses in 3 lines. I did a bit of a hodge podge job of this fairy and glued my finger on in the process! You might need to add glue between the layers of hair. 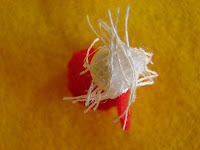 8. Fill the hat with glue and pop it on. Then style the hair with some embroidery scissors and draw on a simple face with a permanent marker. Easy peasy! 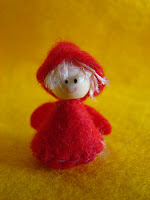 Most importantly, here is Rainbow girl playing with the fairy. This is a picture of the fairy sitting on her jumping bean (trampoline) birthday cake complete with 10 candles, a raspberry on top and two fairy friends singing Happy Birthday. 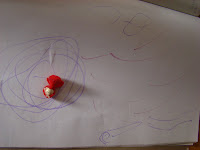 And here's the girl herself joining in the singing. 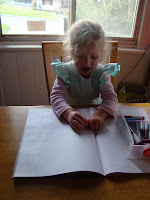 I hope this tutorial is clear. It's my first attempt so I'm keen on getting some feedback and I would love to see your fairies. I hope to hear from you.
Posted by Kristine at 7:35 PM 2 comments:

Yeah - first project finished. This is Rainbow Girl's quiet book. This book took a long time in planning. I wanted it to be Australian, relevant to Rainbow girl's experiences, tell a story and have lots of interactive features.
Page 1 This little doll starts in a pocket on the front cover. I'm really pleased with how she turned out - a little miniature Rainbow Girl. Her elastic waisted pants and press stud closed top are removable.
Page 2 The wheel spins around the centre button so that you can see different things out the window.
Page 3 This little backpack holds the loose pieces for the coming page. It has a drawstring. I'm thinking of using this basic pattern to make a life size backpack for Rainbow.
Page 4 The baby animals are joined to their mothers with a hook and eye. They're made of leather and fleece for the tactile nature.
Page 5 The fruit is held on with press studs. Underneath are the inside of the fruit.
Page 6 The echidna slides along the ribbon to eat the ants. I love the little hand embroidered ants.
Page 7 The spider and spider orchid are buttoned on.
Page 8 The camera. This one is a bit fiddly to operate. When you pull the ribbons it reveals 3 different photos of Rainbow girl out bush.
Page 9 The sausage are attached with Velcro and can be moved from the BBQ to the hot dog buns.
Page 10 The tent zips open. Inside is a little fake fur bilby.
It's mostly made of felt which I love working with for its luxurious tactile nature (for both the sewer and recipient), it's firm for hand embroidery (and I need all the help I can) and it doesn’t fray. Because of thickness – doesn’t lie flat – pieces need to be even further in from edges
The downside is that it would have been much cheaper to have made the pages out of calico. The pages are also very bulky so the book doesn't look neat when closed and even my fabulous walking foot struggled getting through the layers to sew the centre seam. I possibly should have made the outer pages progressively bigger.
Recently I came across this tutorial http://quietbook.blogspot.com/ which I wish I'd seen before making mine. The idea of binding the pages with a ring is great. It would make the book easy to use in the car and also means you can add and remove the pages starting with tactile ones for a baby and then adding the more challenging ones on as they grow. I also like the addition of extras like a card game. finger puppets and pencil and paper to really extend the use. Wouldn't that be great for long trips. I've already started thinking about a food / cooking book for Moonshine... but first I've got more UFOs.
Posted by Kristine at 8:47 PM 5 comments:

I'm in the mood to start something new but I have so many unfinished projects. So this week will be the week to get things done, tie up loose ends. I have about 90 minutes during the girls' naps and before bed at night to

* Finish Moonshine's quilt - the last bit of quilting, around applique with the free motion foot. Another Mum I know warned me that her first child's quilt was completed before they were born (as was Rainbow Girl's) but the second child's wasn't completed until they turned 2.

* Finish Rainbow Girl's quiet book - the pages are done. They simply need to be

* Sew Rainbow Girl's rainbow of fairies to live in her mushroom house. Templates drawn and protiges sewn. August is handsewing month at "Sew,Mama,Sew!"http://www.sewmamasew.com/blog2/ so it's been a lovely armchair project for the evenings.

* Sew birthday crowns for the girls. (I know it's over 3 months to Rainbow's and 5 months til Moonshine's but I've already cut out the pieces.)

Stay tuned to see how I go.
Posted by Kristine at 8:05 PM No comments:

This week Russell and Rainbow girl have been struck down with suspected swine flu. This has resulted in us spending nearly a whole week at home. It's actually been really good to slow down life. Thankfully Moonshine and I have remained healthy - magic stuff that breast milk! All that time at home has also resulted in Rainbow child now able to push her tricycle pedal nearly a half circle and Moonshine to sit up for short periods. Rainbow girl and I did a little piggy inspired craft making a spinning ballerina pig. 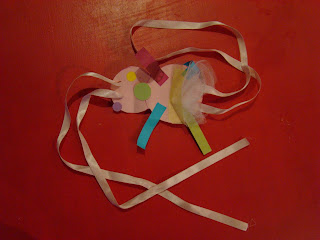 We saw this idea on "Play School". To make it spin you hold by the two ends of the ribbon, making a circle with one arm to wind it up. You then hold it upright and it spins.
I finally hot glued gunned the little button snouts on the three little pigs. 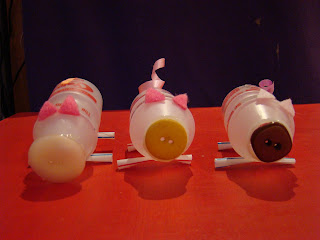 They are awfully cute with their button snouts. It makes me want to sew little pig softies.
Posted by Kristine at 8:13 PM 1 comment: